I’m a very conflicted person when it comes to having a social life. Half of me is a bonafide introvert who likes to stay indoors, far away from humanity – and the other half is always anxiously thinking I’m not living life to its fullest, pushing me to take advantage of every possibility that arises.

It’s a constant battle – one of which my pesky introverted side seems to be winning more and more frequently these days – so I’ve been attempting to even out the playing field a little by socialising more, and it’s been tough, but resulted in one of my more eventful weeks of the year.

I figured I should probably take advantage of this rare influx of activity, so I’m sharing a little look into my week – I’d love to be able to post something like this more often, but my days usually consist of Netflix so It probably wouldn’t be very interesting.

Monday | My week started off with a bit of depressing news – Kevin the Kia is no more. I took him in for his annual MOT, and he failed – big time. Apparently there was a hole in the exhaust and a problem with the windscreen washers, and some other car speak, so I was looking at a minimum of £400 to fix everything. I just couldn’t justify spending that much on a car I only use a couple of times a month.

Both Jess and my mum agreed that it was about time I let him go – I’ve had the car for over 10 years, which is a ridiculously long time – so he’s currently sat outside my house until I have the courage to sell him for scrap. I’m looking at getting about £100 back for him, so now I’m thinking – should I buy a bike in his place? Kevin part 2. I’ve been contemplating getting one of the summer, but I haven’t ridden one for like 10 years – is it true that you never forget how to rid? I bloody hope so.

Tuesday | As you might of noticed, I’ve had a little play around with the look of my blog, and I’m finally happy with how it looks – for the time being anyway. I have a tendency to get annoyed with the layout, but I found a template that lets you display all the posts vertically on the front page, and it looks so glorious and neat. It also allows you to display your own logo – which I’ve been desperate to show off for ages. What do you think so far?

It’s still not perfect, I know that. I need to go through each post and reformat them a little, then play around with the fonts because now that the writing is so much smaller, it’s made the comments section almost unreadable. But I love that fact that I can feature my favourite posts at the top of the homepage, and I have a widget bar again, so I’m going to flesh that out with fun stuff next. Working progress.

Wednesday | One of our local pubs – Lord John Russel’s – host’s a weekly quiz, and when I heard that Wednesday was gin themed, with free samples, I was so there. Jess and I headed down after dinner with some friends, completely expecting to do quite terribly, and actually ended up winning – geniuses! The prize was a £30 bar tab.

It was a lot of fun in the end. The quiz was split into 4 sections, each with a different theme – general knowledge, gin, movie quotes and UK Soaps. We smashed most of the sections, specifically gin (because I’m apparently an alcoholic) and movie quotes (because Jess is basically Rain man). There was a bonus round too, where a team member had to compete in a limbo competition. We volunteered Mike since he had drunk the most and was pretty boozy. 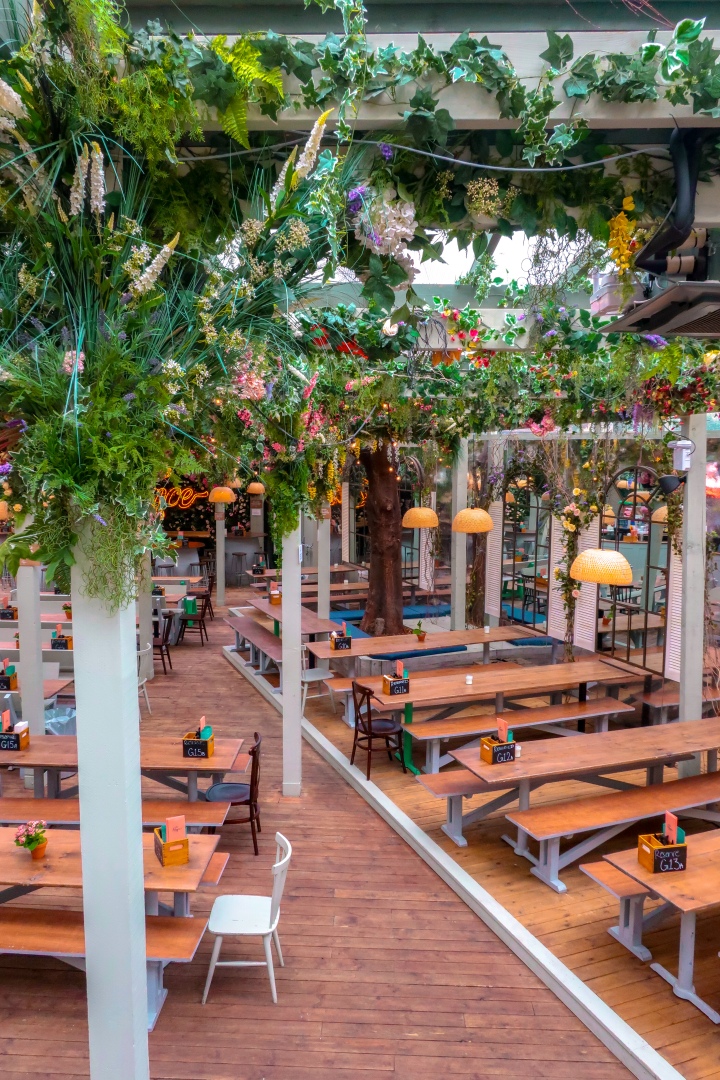 Thursday | My Director at work retired this week, so I went to a leaving shindig on Thursday at this beautiful bar called The Prince. It was just up the road from our office in Kensington – close to Earls Court station – where we had reserved a couple of tables on their terrace for lunchtime, overlooking the beer garden. There were flowers absolutely everywhere – on the walls, on the ceilings, winding along the beams. It was stunning.

Rather than having one main kitchen, there were four smaller restaurants within the building, so we had lots of choice for food. One was a burger bar, another sold chicken, and the two others were Asian. I ended up getting some brisket nuggets, mainly because brisket sounds so funny. They were honestly one of the tastiest things I’ve ever had. I’d love to go back when it’s a little busier, so that I can explore the lower terrace.

Friday | The trains to London have been bloody awful recently, so when I got to the station on Friday to find out that all of mine had been cancelled, I headed back to the apartment to work at home. It was such a beautiful morning, that I decided to take a little detour along the beach – playing Pokemon Go on route because I’m slowly becoming obsessed with the game again – and found myself in the Southsea Rose Gardens.

It was gorgeous. The sun had only been out for a short while, so the lighting was at peak golden hour, which gave everything this soft glow. It made the whole area look completely magical, with this blanket of multi-coloured roses. I must have taken a hundred photos trying to capture what I was seeing – though I definitely didn’t so it justice.

Saturday | I ended the week with a bit of live music. Because Jess is in the RAF, he has access to this site which basically offers people in the forces a load of free tickets to various events – comedy shows, gigs, exhibitions, etc. – and managed to get his hands on a handful to see UB40 at a festival called Boundless Summer, held at Borde Hill Gardens in Haywards Heath – about an hour and a half away from us.

It was in a big open field with a massive stage, right next to these beautiful gardens, so we decided to have a wander before the main band came on. It was filled with every flower you could imagine – I feel like I’ve had a flower overload this week – and we spent a good 30 minutes getting lost down the winding paths, just like Alice in Wonderland. UB40 came on stage at about 9pm and were great. I’m not hugely familiar with them – I know like two of their songs – but they were still fun to dance along to.

So that’s my week. It wasn’t particularly geeky, except for the fact like I felt like I was in some sort of Wonderland throughout most of it, but it was fun. I got to explore London a little, and my home town. I got to cross another band off my list, win some money, and earn some money. It’s been eventful. What has your week been like?

11 thoughts on “Life Lately | The Prince, the Quiz Night, and a Boundless Summer”

Hi, I'm Emma, a professional geek from Southsea, with a massive love for travel. Geeky Tourist is my way of sharing tips on how to make each day a little geekier than the last. If you love books, movies, TV series, games, science, or history, you are going to find something here for you. Enjoy!